Night Flight“ over Gruyères – Opening of the Vali Myers Exhibition at the H.R. Giger’s Museum in Switzerland

Despite losing its owner, creator and one of the most intriguing surrealist artists of the 20th century last year, the H.R. Giger Museum is still the place where the visionary elite can find a safe spot away from the everyday grind of blank reality. Thus, In October of this year it became the home of Vali Myers, an Australian-born artist whose influence, since the early 1950s, spilled across visual arts, music, creative hotspots in New York, Paris, and around the world, inspiring free spirits to this day. One is immediately taken by the sophisticated connection these two artists share: their art broke the barriers of perception dumbed-down by the mainstream „unquality“, their powerful expression only becoming stronger as time goes by in the eternal and sometimes trivial pursuit of meaning.
The opening of the Vali Myers exhibition under the title „Night Flight“ at the Giger Museum was ‘the sign’ I must’ve needed to return to Gruyères, since more than three years passed from my first voyage to this charming village in the French part of Switzerland. Besides cheese, good wine and a breathtaking view of the towering mountains, Gruyères also boasts three museums, one of which – the H.R. Giger’s astonishing legacy – has found itself ranked high on the lists of „top places to see before you die“, although the clichéd musings about the ‘frightening’ Alien and other creatures living in this museum are nothing short of tedious. For this castle and the permanent exhibition of Giger’s works inside offer a true time, space and thought machine that defies ordinary perception, and most certainly the common definitions often mentioned for the purpose of ‘understanding’. Thus, a match made in artistic heaven was made between the museum and Vali’s most influential and respected works.
Speaking of which, I cannot possibly write about her paintings without first offering a better view of Vali herself, because she was the personification of the unbreakable bond between the artist and her art. Listening to Ruth Cullen, one of the curators of the exhibition, and her inspiring speech at the opening ceremony in the autumn hours of the first day, one word in particular caught my ear: „creatrix“. It instantly called to my mind the images of a powerful female being, a rusalkawhose beauty was known well beyond her Slavic fairy waters, a true goddess with a golden sceptre in one hand and a fine English pen in the other. From her youthful years spent in post-WWII European capitals to the decades lived in her animal sanctuary in Il Porto, Italy, Vali defied categorisation, content to raise an eyebrow (or two) with her flamboyant looks and way of life. Vali’s art, which often took months and even years to complete, did not cause inquisitory looks, though – it raised heartbeats and people fell in love with her intricate, intimate drawings, for good.
Many current and future lovers of Vali’s art gathered for the opening and had the chance to delve into her world through a carefully selected set of early monochrome works and later creations bursting with eye-pleasing colours, including some never-before-seen paintings discovered by Ruth Cullen, who is also the executive director of the Vali Myers Art Gallery Trust Fund and filmmaker behind two documentaries about Vali. One of these, titled „The Tightrope Dancer“, was shown at the ‘cinema vault’ of the museum for the exhibition visitors, and seeing it in this unique setting has got to be one of the most memorable experiences for me – all around me were people who knew her personally and were featured in the documentary as well, and it was like Vali was with us that day. In fact, I’m sure she was, smiling her Daliesque smile in all its glory and whispering about what inspired her as we looked closely at each exhibited work.
„Moby Dick“, a prominent painting in Vali’s oeuvre and on display at the museum, shows the neverending battle between nature and mankind through characters from Melville’s classic and Vali’s favourite read. „Foxy“, also the cover painting of the exhibition, shows her faithful pet and companion of many years, and continues the thread of the close relationship of Vali’s vision to all things nature, passion, and energy. These are just two works from the rich collection on display at the Giger museum in the following months – like the rest, they invite another look, another thought, a discovered detail hidden in the opium dreams above the red-haired creature („her, but not her“, paraphrasing Vali). „Night Flight“ is further enriched with several portraits of Vali who was as much a character of her own creation as she was the creator.
From her unique creations, including the special font that decorated her art, to her exceptional life and the influence still seen and discovered today by budding artists, writers, and other seekers of the unknown, Vali Myers has envisioned a cosmos that encompasses truly everything – and in the surroundings of another, Giger’s cosmos, it represents a yearned-for world that, from October 2015 to May 2016, resides in Gruyères.
Ilhana Škrgić 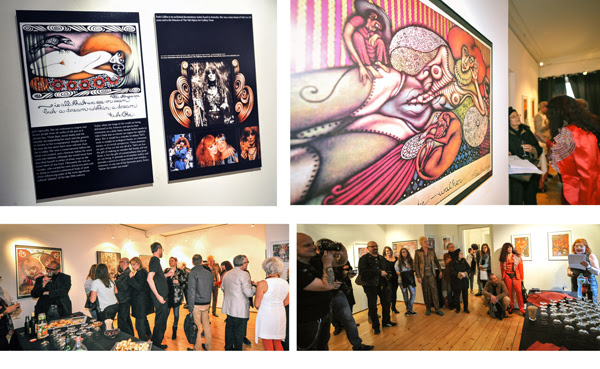 H.R. Giger, one of the most significant representatives of „fantastic realism“, known across the globe for his distinct biomechanic worlds and famous horror-sci-fi film legacy, was recently awarded with a square bearing his name in the hometown of Chur, Switzerland. A plaque was also placed on the house where he was born, just a few meters from the newly minted „Gigerplatz“. Family, friends and close collaborators, along with many fans, gathered on November 12th and witnessed the unveiling of both the plaque and the fountain decorating the square, which was followed by a special exhibition in the city hall under the title „Happy Birthday, Mr Giger“.

The copyrights for all artwork used on this website belong to the artists who created the works.

Donate to The Society